For lean startup ,the project will iterate faster on ethereum than on bitcoin

When a user Stakes REP in a Crowdsourcer, that Crowdsourcer will allocate an equal amount of Dispute Tokens to that user. Then, when the Crowdsourcer’s Market is Finalized, these Dispute Tokens are used by Augur’s smart contracts to determine the payout that user should receive. Dispute Tokens are only used internally by Augur, and users do not interact with them directly; however, they are implemented as ERC-20 tokens, so they potentially can be traded between users. (For example, a user might want to sell their Dispute Tokens to another user at a discounted price if a Market is being Disputed for a long time and the user wishes to cash out their Dispute Tokens before the Market is Finalized.) https://docs.augur.net/#dispute-token Each Outcome of a Market has its own Crowdsourcer, which is a Solidity smart contract that keeps track of how much REP has been Staked on a particular Outcome during a given Fee Window. If users Stake enough REP on that Outcome to fill the Dispute Bond and Challenge the Tentative Outcome, that Outcome will become the new Tentative Outcome (and the Market will go through another Dispute Round), or the Market will Fork (if a Dispute Bond greater than the Fork Threshold is filled). If the Dispute Bond is successfully filled, and that Outcome becomes the Final Outcome for the Market, the users who Staked REP on that Outcome can get back 1.5x the amount of REP they originally Staked, once the Market is Finalized. If the Dispute Bond is successfully filled, but that Outcome does not become the Final Outcome for the Market, the users who Staked REP on that Outcome will forfeit all of the REP they Staked. If the Dispute Bond is not successfully filled, the users who Staked on that Outcome can redeem their REP once the Fee Window has elapsed. https://docs.augur.net/#creator-fee

Cash is an ERC-20 token that is used within Augur’s Solidity smart contracts and acts as a wrapper for ETH to facilitate some of Augur’s functionality. Users do not interact directly with Cash tokens in Augur. https://github.com/AugurProject/augur-core/blob/65561b0a0b7064c9f83bad6b8f9883911576ce65/source/contracts/trading/Cash.sol https://github.com/AugurProject/augur-core/blob/433a8691ed2caaa92d4443dc4ae22e63fcb82c2a/source/contracts/reporting/Market.sol

Cash is an ERC-20 token that is used within Augur’s Solidity smart contracts and acts as a wrapper for ETH to facilitate some of Augur’s functionality. Users do not interact directly with Cash tokens in Augur.

Reporter with REP token stake report,Augur oracle and Oracle reporting dispute - crowd wisdom REP (Reputation) token holders can participate in the Augur reporting system. REP token holders have the ability to dispute the tentative outcome of any Augur market within 7 days of resolution by staking a dispute bond. When doing so, the Augur market will go into a dispute round, where REP holders can stake REP tokens on one of the markets possible outcomes. If the tentative outcome is overturned, users who participated by staking on the new winning outcome will receive a 50% ROI. There is always a financial incentive to keep the Augur oracle reflecting reality. https://docs.augur.net/#reporting 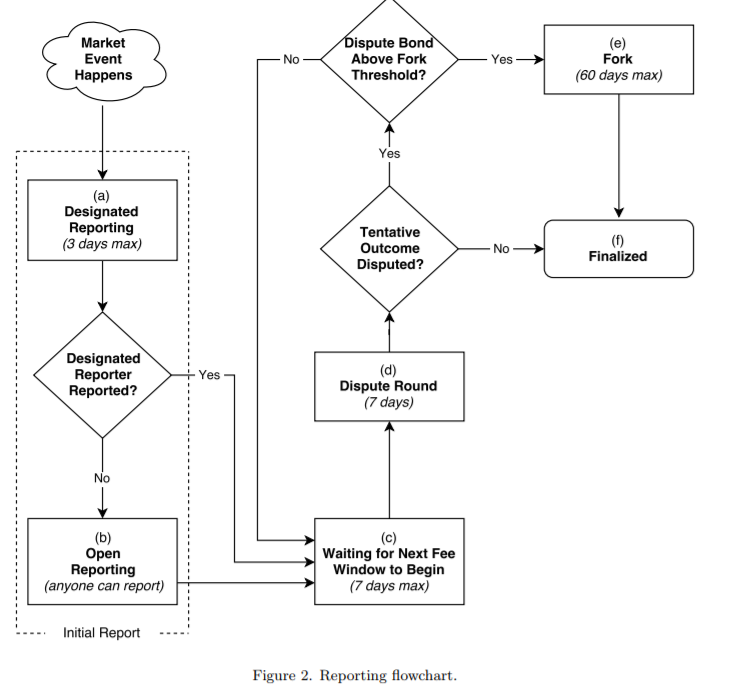 Redemption for fee and REP 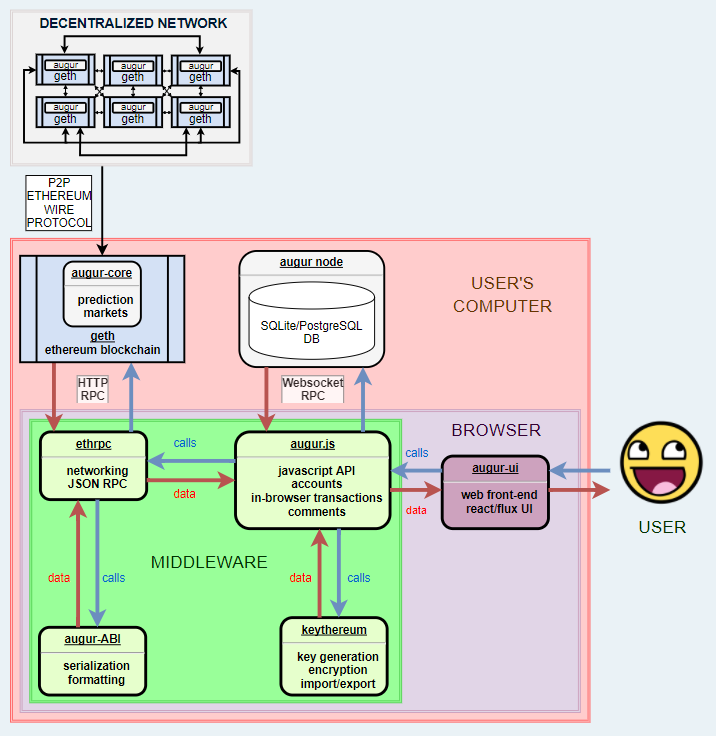 Smart contracts based on ethereum

All the business API to talk with the blockchain

# 2.2 incentive and penalize for different participants 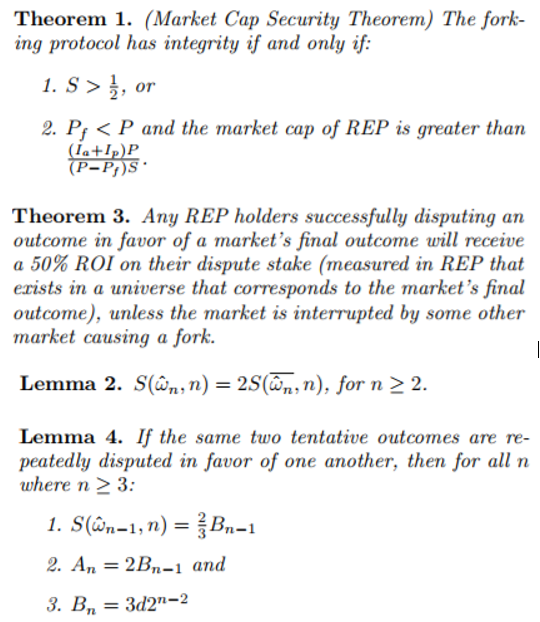 https://github.com/AugurProject/augur-walkthrough For example they have very good and comprehensive test cases and API documents But need further study on this