Computers only deal in numbers and not letters, so it’s important that all computers agree on which numbers represent which letters English&non-English letters/numbers/punctuation mark ===> 0101010 0s1s /binary numbers ==> called code point in unicode Everything is stored in hard drive and load in memory in binary format, but display in hex format for human readability, And some apps or cli tools, they will always try to display the loaded binary data in their default or set encoding(or decoding accurately) format, if the ‘display encoding’ is the same or compatible with the encoding used to store them, the characters will be shown in the correct/original character, but if the encoding not compatible, there will be 2 cases:

a) Find the ‘wrong mapping’ (because default encoding standard map the same 0s1s to different character, if the range covered, it will show something else b) But when it’s out of range, then it failed to translate the code points , it will show its ‘original binary’ in hex format

In computing, a code page is a character encoding and as such it is a specific association of a set of printable characters and control characters with unique numbers.

# 1.2 Unicode standards and the implementations

Unicode defines or standardize code points, but it has more than one code pages https://www.ibm.com/developerworks/library/ws-codepages/index.html

Unicode is a standard, not an implementation, there are many implementations: UCS** & UTF** https://stackoverflow.com/questions/643694/what-is-the-difference-between-utf-8-and-unicode 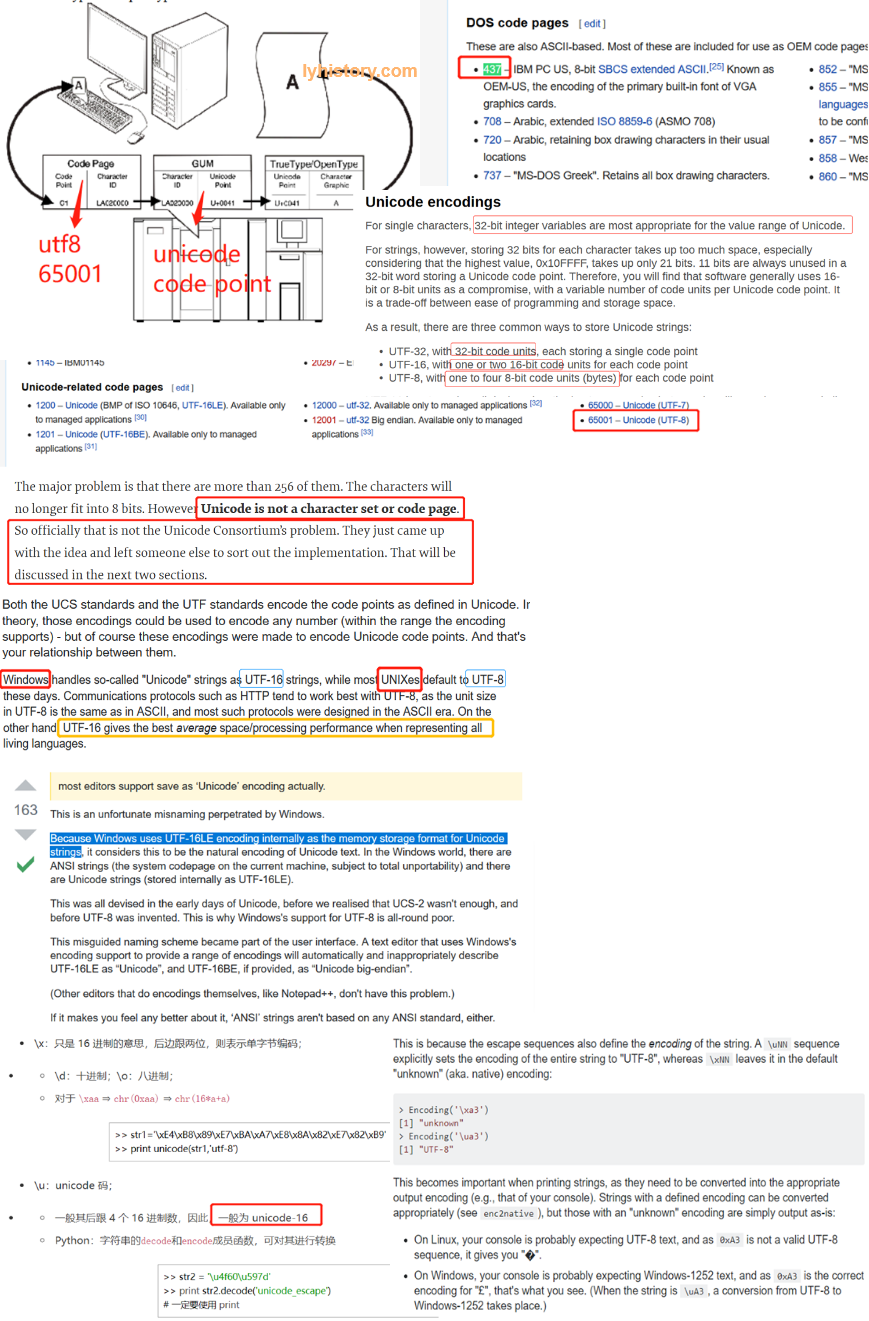 The PHP function chr does a similar thing to Javascript’s String.fromCharCode, when the client side/browser request for this php page, php interpreter will for example interprete chr(224) and embeds the number 224 into the Web page reponse before sending it to the browser.

This is the situation in about 1990. Documents can be written, saved and exchanged in many languages, but you need to know which character set they use. There is also no easy way to use two or more non-English alphabets in the same document, and alphabets with more than 256 characters like Chinese and Japanese have to use entirely different systems, for example gd2312

Starting in the late 1980s, a new standard was proposed – one that would assign a unique number (officially known as a code point) to every letter in every language, one that would have way more than 256 slots. It was called Unicode. It is now in version 6.1 and consists of over 110,000 code points. If you have a few hours to spare you can watch them all whiz past. The first 128 Unicode code points are the same as ASCII. The range 128-255 contains currency symbols and other common signs and accented characters (aka characters with diacritical marks), and much of it is borrowed ISO-8859-1. After 256 there are many more accented characters. After 880 it gets into Greek letters, then Cyrillic, Hebrew, Arabic, Indic scripts, and Thai. Chinese, Japanese and Korean start from 11904 with many others in between. The major problem is that there are more than 256 of them. The characters will no longer fit into 8 bits. However Unicode is not a character set or code page. So officially that is not the Unicode Consortium’s problem. They just came up with the idea and left someone else to sort out the implementation. computers have advanced since the 1970s. An 8 bit microprocessor is a bit out of date. New computers now have 64 bit processors, A lot of software is written in C or C++, which supports a “wide character”. This is a 32 bit character called wchar_t. It is an extension of C’s 8 bit char type. Internally, modern Web browsers use these wide characters (or something similar) and can theoretically quite happily deal with over 4 billion distinct characters. This is plenty for Unicode. So - internally, modern Web browers use Unicode.

Universal Character Set Transformation Format 8 bit So if browsers can deal with Unicode in 32 bit characters, where is the problem? The problem is in the sending and receiving, and reading and writing of characters.

The problem remains because:

UTF-8 is therefore a multi-byte variable-width encoding. Multi-byte because a single character like Я takes more than one byte to specify it. Variable-width because some characters like H take only 1 byte and some up to 4.

Best of all it is backward compatible with ASCII. Unlike some of the other proposed solutions, any document written only in ASCII, using only characters 0-127, is perfectly valid UTF-8 as well - which saves bandwidth and hassle.

PHP embeds the 6 numbers mentioned above into an HTML page: 72, 208, 175, 226, 190, 128. The browser interprets those numbers as UTF-8, and internally converts them into Unicode code points. Then Javascript outputs the Unicode values. 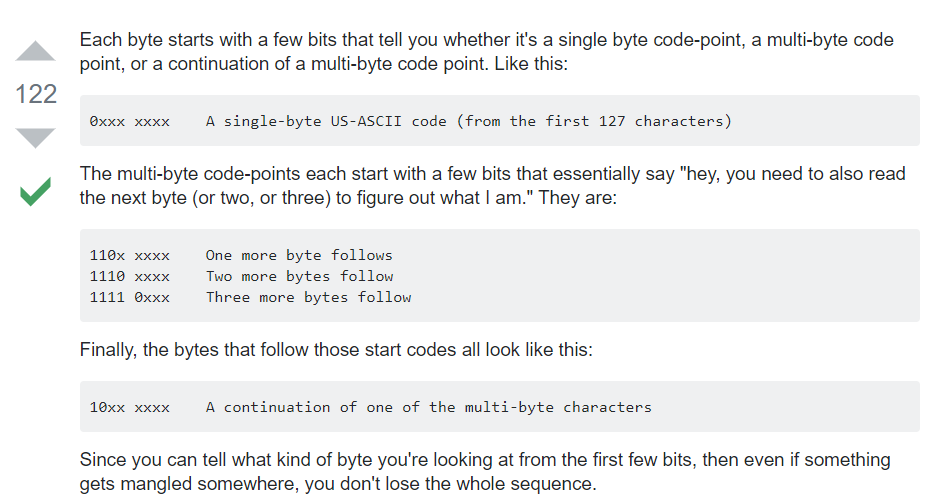 Usually when we talk about all the above utf-8 gb2312, normally we don’t talk about decode, we only say encoding in such ** format, because the decode process is automatically done: Nodepad++ display human readable characters for files stored in binary format on the disk; Memory viewer or traffic viewer display hex format for the binary data loaded or transferred; Web server interprete responding asp/php files requested and encoding the response using format defined in headers, and then browser receive the http response and decode it into html language file(human readable, inspect the source file) and then render it to the real web pages. And for the other kind of encoding algorithm used for higher level, for example URL ENCODE/HTML ENCODE/HASH/BINARY TRANSFER ENCODE(BASE64), we have to decode it manually or programmatically. 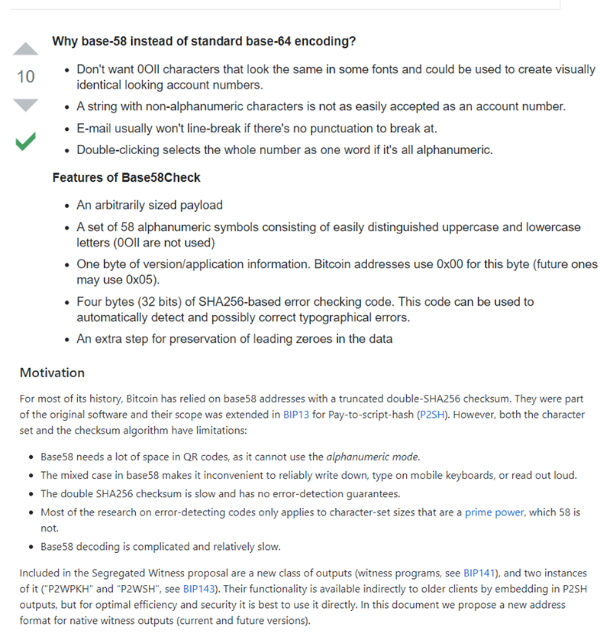 UTF-8 is a text encoding - a way of encoding text as binary data. Base64 is in some ways the opposite - it's a way of encoding arbitrary binary data as ASCII text. when you hae some binary data that you want to ship across a network, you generally don't do it by just streaming the bits and bytes over the wire in a raw format. why? beause some media are made for streaming text. You never know -- some protocols may interpret your binary data as control characters(like a modem), or your binary data could be screwed up because the underlying protocol might think that you'e entered a speical character combination (like how FTP translates line endings). so to get around this, people encode the binary data into characters.Base64 is one of these types of encodings.

best practice: unicode all the way!

gb2312.txt内容是：中文测试 Both files are stored in binary bytes, all 0s 1s, only different is the encoding of the file itself. Php doesn’t give a shift of what encoding gb2312.txt and other files it operates on or the database it operates on. PHP Interpreter only cares about the php file encoding itself, as long as it’s utf-8 compatible, it can interpret the php grammar and translate into html response back to the client, and the html response encoding is subject to the response header setting(default utf-8).

This looks like binary data held in a Python bytes object. Loosely, bytes that map to printable ASCII characters are presented as those ASCII characters. All other bytes are encoded \x** where ** is the hex representation of the byte. https://stackoverflow.com/questions/26802581/can-anyone-identify-this-encoding https://www.cnblogs.com/chen-lhx/p/7559834.html

https://www.smashingmagazine.com/2012/06/all-about-unicode-utf8-character-sets/ As long as everybody is speaking UTF-8, this should all work swimmingly. If they aren’t, then characters can get mangled.