Procedural Programming, Functional Programming, OO and AO Programming, we have so many programming methodology, what we discuss here is all based on OO Programming. When we say OO design and design pattern, we must mention ‘GOF book’,as introduced in wiki: The name of the book (“Design Patterns: Elements of Reusable Object-Oriented Software”) is too long for e-mail, so “book by the gang of four” became a shorthand name for it. After all, it isn’t the ONLY book on patterns. That got shortened to “GOF book”, which is pretty cryptic the first time you hear it.

Single Responsibility Principle Motivation In this context a responsibility is considered to be one reason to change. This principle states that if we have 2 reasons to change for a class, we have to split the functionality in two classes. Each class will handle only one responsibility and on future if we need to make one change we are going to make it in the class which handle it. When we need to make a change in a class having more responsibilities the change might affect the other functionality of the classes. The Single Responsibility Principle is a simple and intuitive principle, but in practice it is sometimes hard to get it right. Intent A class should have only one reason to change.

Liskov Substitution Principle Motivation All the time we design a program module and we create some class hierarchies. Then we extend some classes creating some derived classes. We must make sure that the new derived classes just extend without replacing the functionality of old classes. Otherwise the new classes can produce undesired effects when they are used in existing program modules. Likov’s Substitution Principle states that if a program module is using a Base class, then the reference to the Base class can be replaced with a Derived class without affecting the functionality of the program module. Intent Derived types must be completely substitutable for their base types.

Interface Segregation Principle Motivation When we design an application we should take care how we are going to make abstract a module which contains several submodules. Considering the module implemented by a class, we can have an abstraction of the system done in an interface. But if we want to extend our application adding another module that contains only some of the submodules of the original system, we are forced to implement the full interface and to write some dummy methods. Such an interface is named fat interface or polluted interface. Having an interface pollution is not a good solution and might induce inappropriate behavior in the system. The Interface Segregation Principle states that clients should not be forced to implement interfaces they don’t use. Instead of one fat interface many small interfaces are preferred based on groups of methods, each one serving one submodule. Intent Clients should not be forced to depend upon interfaces that they don’t use.

From the book, understand more than IOC but other patterns: the Null Object pattern, Decorator pattern, Composite pattern,Adapter pattern

“Programming to an interface instead of an implementation” ENABLES “Loose couple”, “loose couple” MAKES CODE “extensible”, “extensibility” MAKES IT “maintainable” 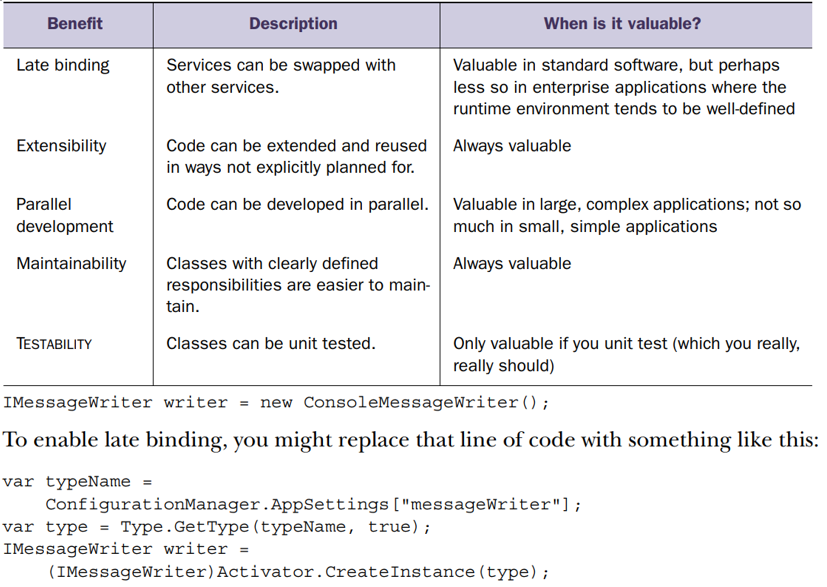 As a class relinquishes control of DEPENDENCIES, it gives up more than the decision to select particular implementations. However, as developers, we gain some advantages.As developers, we gain control by removing that control from the classes that consume DEPENDENCIES. This is an application of the SINGLE RESPONSIBILITY PRINCIPLE: these classes should only deal with their given area of responsibility, without concerning themselves with how DEPENDENCIES are created. DI gives us an opportunity to manage DEPENDENCIES in a uniform way. When consumers directly create and set up instances of DEPENDENCIES, each may do so in its own way, which may be inconsistent with how other consumers do it. We have no way to centrally manage DEPENDENCIES, and no easy way to address CROSS-CUTTING CONCERNS. With DI, we gain the ability to intercept each DEPENDENCY instance and act upon it before it’s passed to the consumer. With DI, we can compose applications while intercepting dependencies and controlling their lifetimes. OBJECT COMPOSITION, INTERCEPTION, and LIFETIME MANAGEMENT are three dimensions of DI.

Software Architecture Functional requirements are structured as use cases.Dependencies among functional requirements are identified as relationships between use cases.The operation flows of each use case is described. Analysis objects are identified along with their state(attributes) and responsibilities(operations) without considerations for implementation. Design strategies are devised for the operating environment to fulfill the quality requirements. Analysis objects are adapted according to the design strategies to become design objects with full class details.

Design problems surface during design activities, they may be solved by applying design patterns, In OOAD, design patterns are applicable when: 1.Devising/Refining the design strategies. 2.Transitioning from analysis model to design model. 3.Iterating within design Model.

3.Appreciate the intent of design patterns

Design patterns capture the intent behind a design by identifying objects and classes, their collaborations, and the distribution of their roles and responsibilities. Importance: Patterns are a rational reconstruction of existing design practices Patterns identify key assumptions that govern the design decisions. Value of a pattern is determined by the quality of exposition.

Template pattern: In Template pattern, an abstract class exposes defined way(s)/template(s) to execute its methods. Its subclasses can override the method implementation as per need but the invocation is to be in the same way as defined by an abstract class. This pattern comes under behavior pattern category. https://baijiahao.baidu.com/s?id=1619116206359982963&wfr=spider&for=pc https://www.tutorialspoint.com/design_pattern/template_pattern.htm 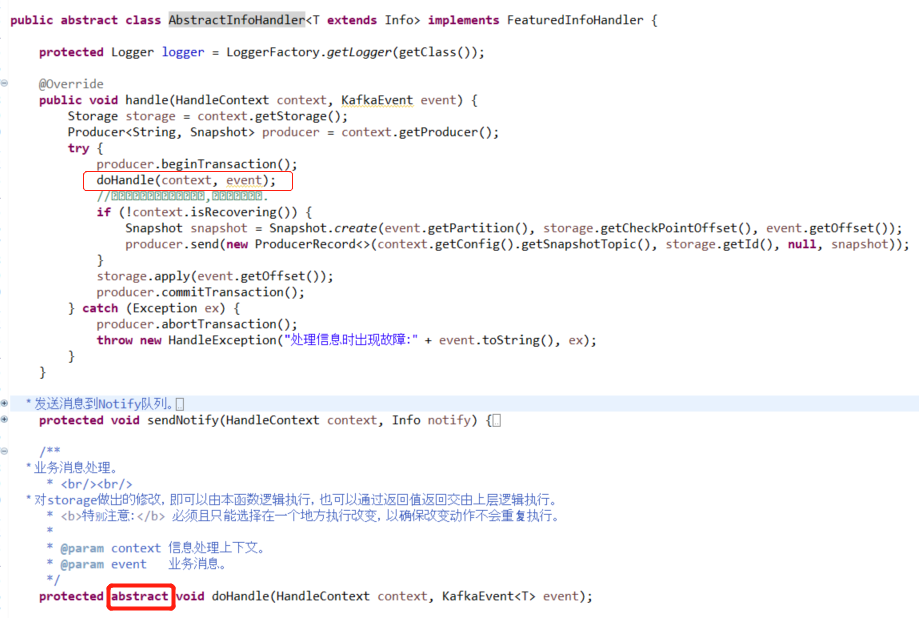 Observation pattern problem: when a change in the object requires change in the others, and you don’t know how many of them need changes. Intent: Define a one-to-many dependency between objects so that when one object changes state, all its dependents are notified and updated automatically.

**Iterator: ** Client Aggregate ConcreteAggregate Iterator ConcreteIterator problem: traverse aggregate in a structured manner, robust to modify traverse algorithm in future. Intent: defines an interface for accessing and traversing aggregate without exposing the latter’s internal representation. Implementation issues and choices: The iteration through the selected aggregate items can be controlled externally, or internally from within the iterator,modify on aggregate items during iteration. it there are multi iterator in aggregator, aggregator

Memento: Caretaker Originator Memento problem:capture snapshots of required subset of state, not burden originator with undo and possibly redo functions. Intent: Memento stores internal state of originator and allows access only by originator, Originator creates and restores from Memento, CareTaker safe keeps memento and does not access the content of Memento. Implementation issues and choices: Programming languages support is required to support the wide and narrow interfaces of memento: Java:inner class C#:nested class C++:friend class Storing incremental changes in memento is feasible if mementos are restored in a predictable sequence

Decorator: problem: add responsibility(states or operations, can be withdrawn) to individual objects dynamically and transparently when extension by sub-classing is not possible. Intent: provide a flexible alternative to sub-classing for extending functionality, attach additional responsibilities to an object dynamically. Please be aware of operation sequence in ConcreteDecorator(decide should you call base.Operation() before or after AddedBehavior()), that will make great difference when drawing sequence diagram.

Factory Method: product concreteProduct creator concreteCreator, problem: polymorphism applies only to the use of objects, not to their creation. Object creation could become very cumbersome especially if the num of subclasses increases. Intent:

Abstract Factory provide a way to encapsulate a group of factories without specifying their concrete classes. Implementation issues and choices: How to create factories ? normally we would put creation of factories in Client using simple factory method, more elegant way is using reflection.

Singleton: Clients access a Singleton instance solely through Singleton’s getInstance() operation problem: when multiple copies are floated in the system, it is difficult to ensure control over the updates. Intent: Ensuring controlled updates of data Implementation issues and choices:use a registry of singletons, the registry maps between key and singleton, when getInstance needs a singleton, it consults the registry, asking for the singleton by name, the registry looks up the corresponding singleton.

Static vs singleton About Singleton: 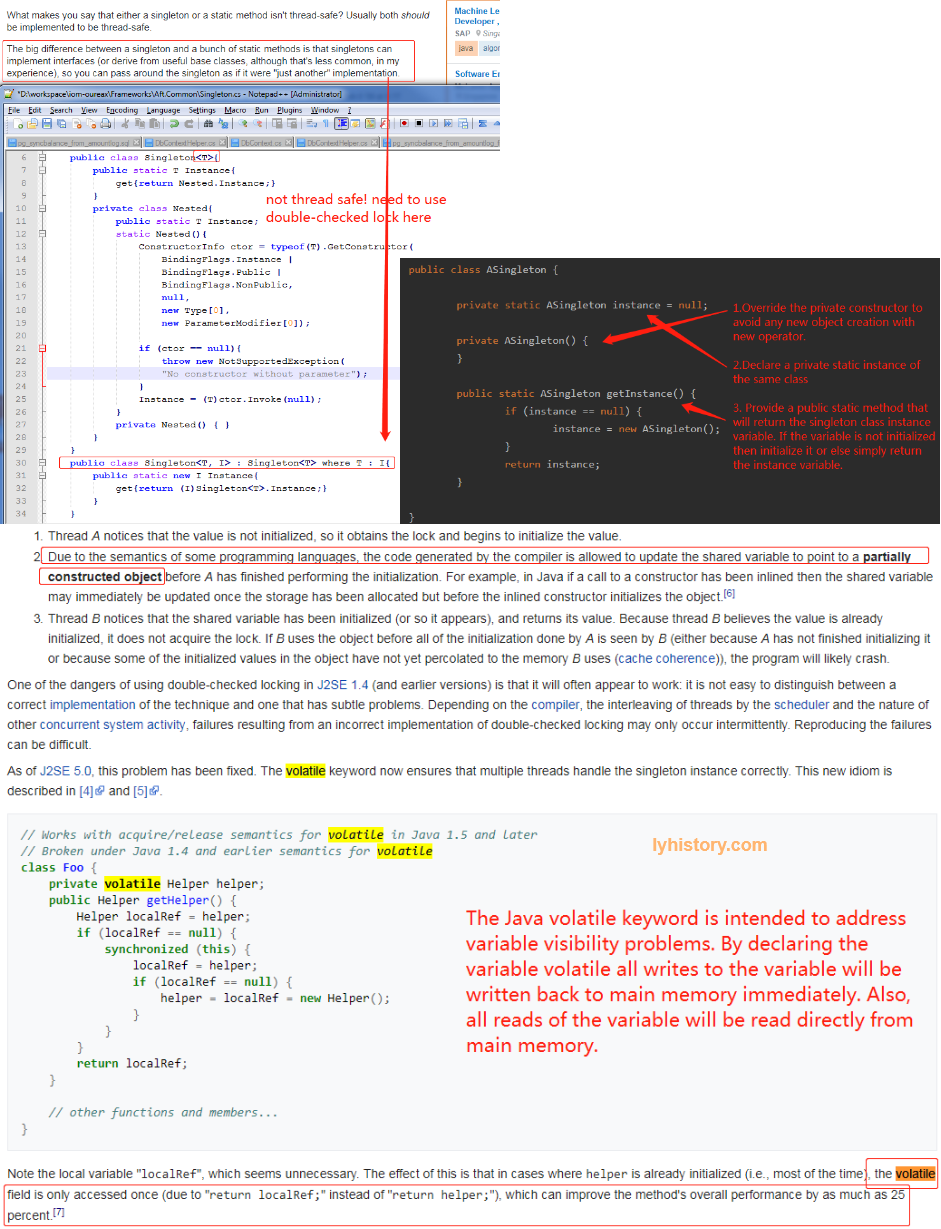 Why singleton is bad? https://medium.com/@sinethneranjana/5-ways-to-write-a-singleton-and-why-you-shouldnt-1cf078562376

Recommended practice is to code frontends in a state-machine style that will accept any message type at any time that it could make sense, rather than wiring in assumptions about the exact sequence of messages. https://www.postgresql.org/docs/11/static/protocol-flow.html