主要参考： A beginner's guide to network troubleshooting in Linux

The layers in the TCP/IP network model, in order, include: 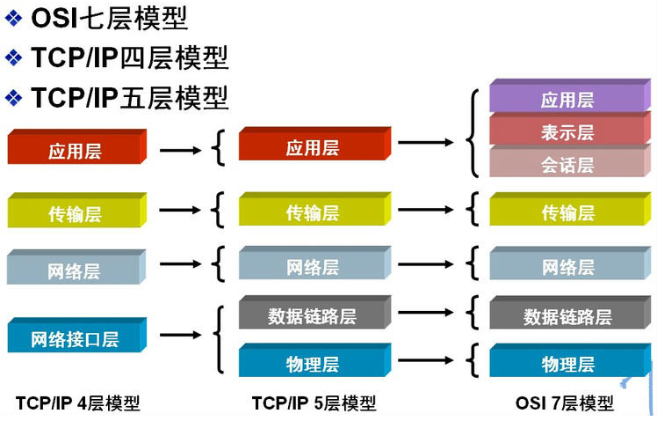 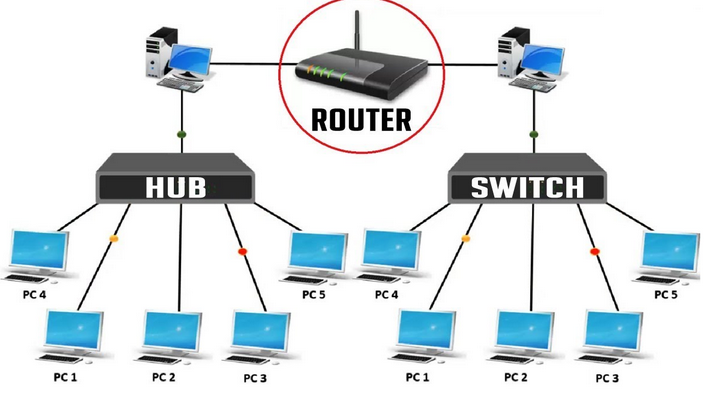 We often take the physical layer for granted ("did you make sure the cable is plugged in?"), but we can easily troubleshoot physical layer problems from the Linux command line. That is if you have console connectivity to the host, which might not be the case for some remote systems.

Layer2是交换机switch（记住arp mapping） The data link layer is responsible for local network connectivity; essentially, the communication of frames between hosts on the same Layer 2 domain (commonly called a local area network). The most relevant Layer 2 protocol for most sysadmins is the Address Resolution Protocol (ARP), which maps Layer 3 IP addresses to Layer 2 Ethernet MAC addresses. When a host tries to contact another host on its local network (such as the default gateway), it likely has the other host’s IP address, but it doesn’t know the other host’s MAC address. ARP solves this issue and figures out the MAC address for us. A common problem you might encounter is an ARP entry that won’t populate, particularly for your host’s default gateway. If your localhost can’t successfully resolve its gateway’s Layer 2 MAC address, then it won’t be able to send any traffic to remote networks. This problem might be caused by having the wrong IP address configured for the gateway, or it may be another issue, such as a misconfigured switch port.

Linux caches the ARP entry for a period of time, so you may not be able to send traffic to your default gateway until the ARP entry for your gateway times out. For highly important systems, this result is undesirable. Luckily, you can manually delete an ARP entry, which will force a new ARP discovery process

layer3是路由器router（ip网段寻址） Layer 3 involves working with IP addresses, which should be familiar to any sysadmin. IP addressing provides hosts with a way to reach other hosts that are outside of their local network (though we often use them on local networks as well). The lack of an IP address can be caused by a local misconfiguration, such as an incorrect network interface config file, or it can be caused by problems with DHCP.

The most common frontline tool that most sysadmins use to troubleshoot Layer 3 is the ping utility. Ping sends an ICMP Echo Request packet to a remote host, and it expects an ICMP Echo Reply in return. While ping can be an easy way to tell if a host is alive and responding, it is by no means definitive. Many network operators block ICMP packets as a security precaution, although many others disagree with this practice. Another common gotcha is relying on the time field as an accurate indicator of network latency. ICMP packets can be rate limited by intermediate network gear, and they shouldn’t be relied upon to provide true representations of application latency. The next tool in the Layer 3 troubleshooting tool belt is the traceroute command. Traceroute takes advantage of the Time to Live (TTL) field in IP packets to determine the path that traffic takes to its destination. Traceroute will send out one packet at a time, beginning with a TTL of one. Since the packet expires in transit, the upstream router sends back an ICMP Time-to-Live Exceeded packet. Traceroute then increments the TTL to determine the next hop. The resulting output is a list of intermediate routers that a packet traversed on its way to the destination Another common issue that you’ll likely run into is a lack of an upstream gateway for a particular route or a lack of a default route. When an IP packet is sent to a different network, it must be sent to a gateway for further processing. The gateway should know how to route the packet to its final destination. The list of gateways for different routes is stored in a routing table

While not a Layer 3 protocol, it’s worth mentioning DNS while we’re talking about IP addressing. Among other things, the Domain Name System (DNS) translates IP addresses into human-readable names, such as www.redhat.com. DNS problems are extremely common, and they are sometimes opaque to troubleshoot. Plenty of books and online guides have been written on DNS, but we’ll focus on the basics here. A telltale sign of DNS trouble is the ability to connect to a remote host by IP address but not its hostname. Performing a quick nslookup on the hostname can tell us quite a bit. Taking a look at the /etc/hosts file, we can see an override that someone must have carelessly added. Host file override issues are extremely common, especially if you work with application developers who often need to make these overrides to test their code during development

:::ffff: 用于IPv4的IPv6套接字通信。应用和套接字方面，它是IPv6，但网络和就包而言，它是IPv4。 In IPv6, you are allowed to remove leading zeros, and then remove consecutive zeros, meaning ::ffff: actually translates to 0000:0000:ffff:0000, this address has been designated as the IPv4 to IPv6 subnet prefix, so any IPv6 processor will understand it's working with an IPv4 address and handle it accordingly.

NAT stands for Network Address Translation. In the context of our network, NAT is how one (public) IP address is turned into many (private) IP addresses. A public IP address is an address that is exposed to the Internet. If you search for "what's my IP" on the Internet, you'll find the public IP address your computer is using. If you look up your computer's IP address, you'll see a different IP address: this is your device's private IP. Chances are, if you check this on all of your devices, you'll see that all your devices are using the same public IP, but all have different private IPs. This is NAT in action. The network hardware uses NAT to route traffic going from the public IP to the private IP.

The transport layer consists of the TCP and UDP protocols, with TCP being a connection-oriented protocol and UDP being connectionless.

TCP: TCP achieves reliability in two ways. First, it orders packets by numbering them. Second, it error-checks by having the recipient send a response back to the sender saying that it has received the message. If the sender doesn’t get a correct response, it can resend the packets to ensure the recipient receives them correctly.

UDP: The sender doesn’t wait to make sure the recipient received the packet—it just continues sending the next packets. If the recipient misses a few UDP packets here and there, they are just lost—the sender won’t resend them. UDP is used when speed is desirable and error correction isn’t necessary. For example, UDP is frequently used for live broadcasts and online games.

Applications listen on sockets, which consist of an IP address and a port. Traffic destined to an IP address on a specific port will be directed to the listening application by the kernel.

A packet sniffer is simply a piece of software that allows you to capture packets on your network. Tcpdump and Wireshark are examples of packet sniffers. Tcpdump provides a CLI packet sniffer, and Wireshark provides a feature-rich GUI for sniffing and analyzing packets. By default, tcpdump operates in promiscuous mode. This simply means that all packets reaching a host will be sent to tcpdump for inspection. This setting even includes traffic that was not destined for the specific host that you are capturing on, such as broadcast and multicast traffic. Of course, tcpdump isn’t some magical piece of software: It can only capture those packets that somehow reach one of the physical interfaces on your machine.

Looking at the above captures provides us with basic information about the packets traversing our network. It looks like these packets contain Spanning Tree Protocol (STP) output, perhaps from an upstream switch. Technically, these aren’t packets, they’re layer two frames. However, you’ll hear the terms used interchangeably when discussing packet captures. Knowing how to adjust the verbosity of your capture is important, as it allows you to dig deeper into the actual data contained within the packets. The verbosity level of tcpdump is controlled by appending between one and three -v flags to the command: 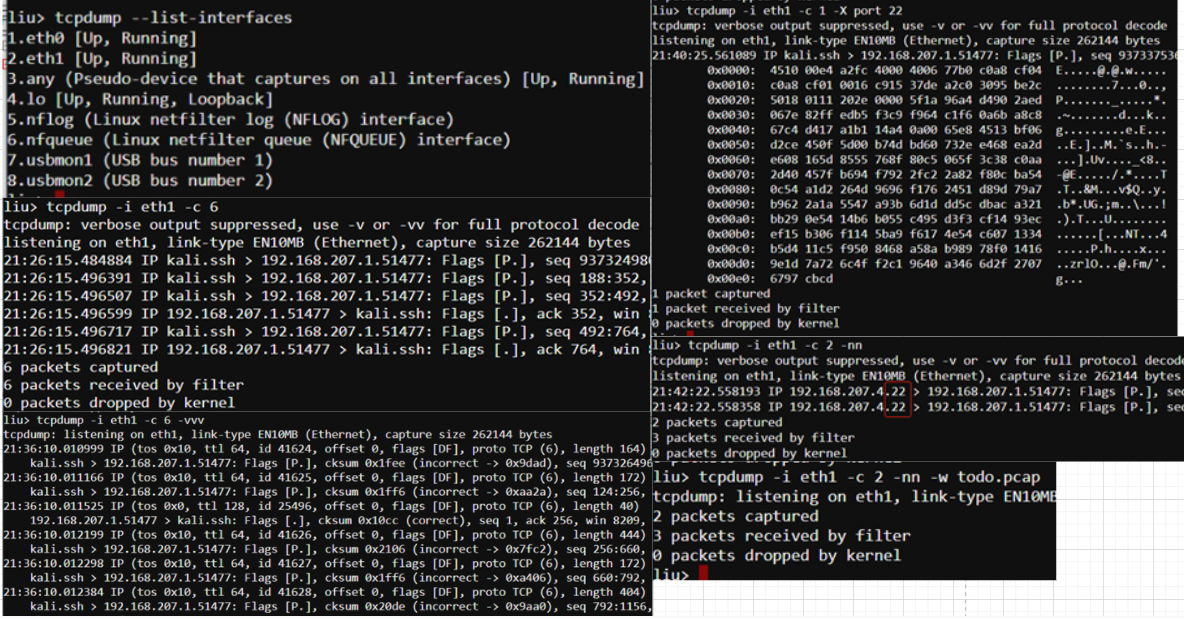 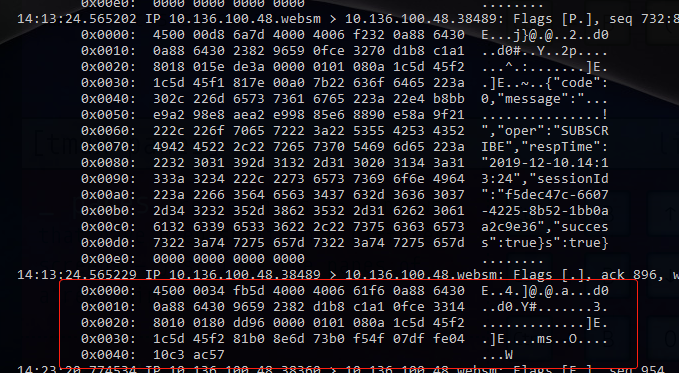 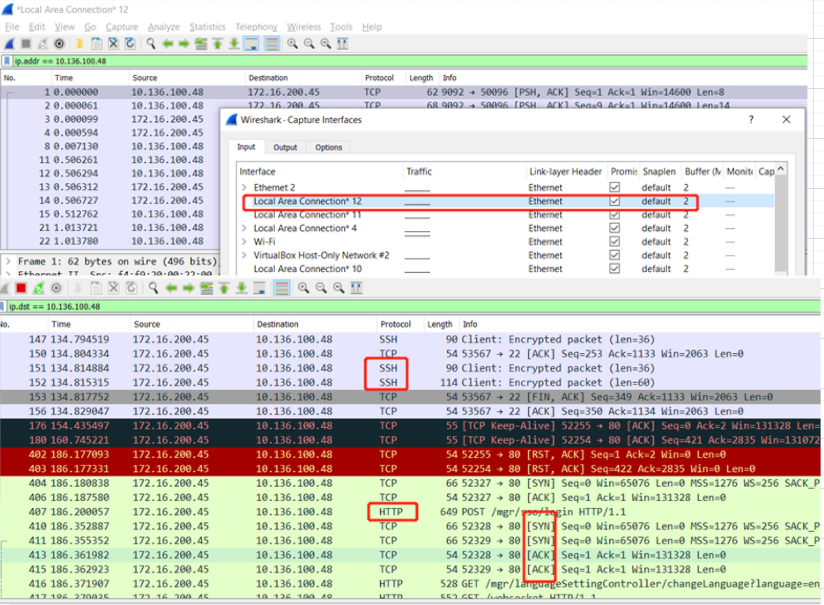 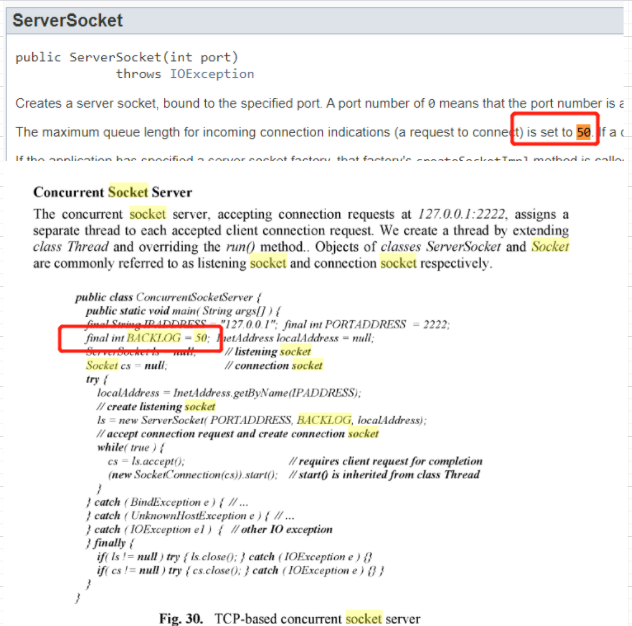 再后来遇到另外一个问题： the ESTAB tcp connection remains even after closed initiator 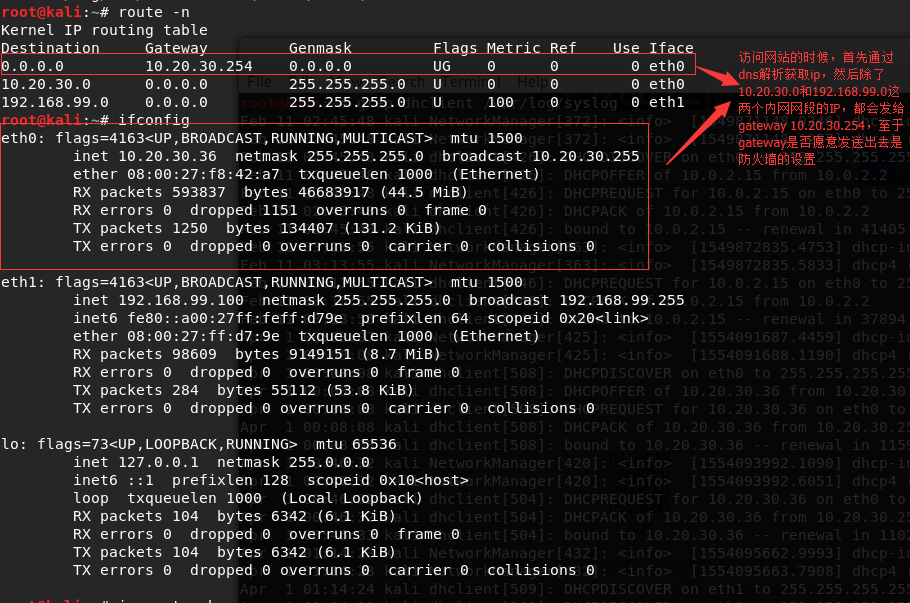 Nowadays we use general purpose applications or libraries to communicate with each other. For example, we often use an HTTP client library to retrieve information from a web server and to invoke a remote procedure call via web services. However, a general purpose protocol or its implementation sometimes does not scale very well. It is like how we don't use a general purpose HTTP server to exchange huge files, e-mail messages, and near-realtime messages such as financial information and multiplayer game data. What's required is a highly optimized protocol implementation that is dedicated to a special purpose. For example, you might want to implement an HTTP server that is optimized for AJAX-based chat application, media streaming, or large file transfer. You could even want to design and implement a whole new protocol that is precisely tailored to your need. Another inevitable case is when you have to deal with a legacy proprietary protocol to ensure the interoperability with an old system. What matters in this case is how quickly we can implement that protocol while not sacrificing the stability and performance of the resulting application. https://netty.io/wiki/user-guide-for-4.x.html

首先要了解两种代理模式：forward proxy（正向代理），reverse proxy（反向代理）： 正向代理，位于客户端，隐藏客户端信息，forward proxy proxies in behalf of clients (or requesting hosts) 例子：vpn技术基本都是正向代理，隐藏客户端信息 反向代理，位于服务器端，隐藏目标机器或服务信息，主要用于load balance等, a reverse proxy proxies in behalf of servers 例子：nginx或者tomcat作为Oracle数据库的反向代理，再比如nginx作为监控UIgrafana的反向代理：Grafana-server runs its own service and hosts dashboard on 3000, if bind to domain, to the normal use access domain, default using 80, need a proxy server who use 80 to forward request to grafana-server for example nginx https://www.jscape.com/blog/bid/87783/Forward-Proxy-vs-Reverse-Proxy

HTTP tunneling is used to create a network link between two computers in conditions of restricted network connectivity including firewalls, NATs and ACLs, among other restrictions. The tunnel is created by an intermediary called a proxy server which is usually located in a DMZ. https://en.wikipedia.org/wiki/HTTP_tunnel

This mechanism is how a client behind an HTTP proxy can access websites using SSL or TLS (i.e. HTTPS). Proxy servers may also limit connections by only allowing connections to the default HTTPS port 443, whitelisting hosts, or blocking traffic which doesn't appear to be SSL. https://en.wikipedia.org/wiki/HTTP_tunnel

** ssh tunnel control ** SSH tunneling is a powerful tool, but it can also be abused. Controlling tunneling is particularly important when moving services to Amazon AWS or other cloud computing services.

A VPN tunnel, however, is fully encrypted. The "P in VPN indicates private. VPN tunnels are typically achieved with IPSeC, SSL, PPTP, TCP Crypt (this is a new protocol), etc.

A VPN is created by establishing a virtual point-to-point connection through the use of dedicated circuits or with tunneling protocols over existing networks. A VPN available from the public Internet can provide some of the benefits of a wide area network (WAN). From a user perspective, the resources available within the private network can be accessed remotely https://en.wikipedia.org/wiki/Virtual_private_network 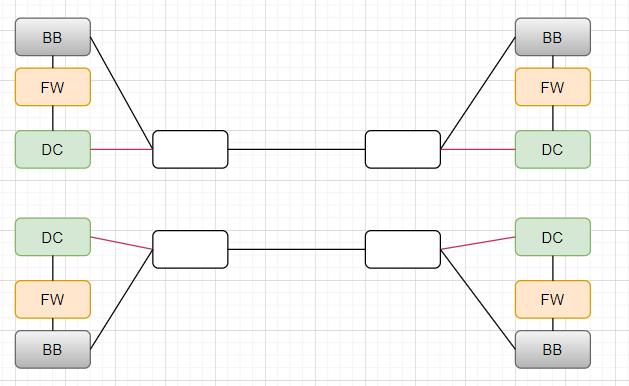